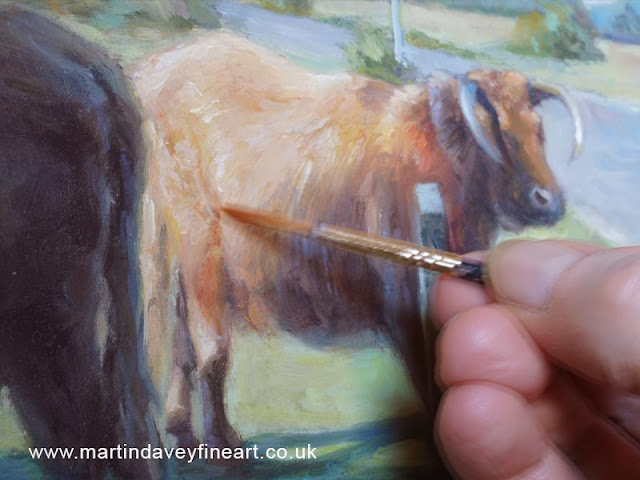 A small snippet of a cow based painting...
Posted by martyee at 16:27 No comments:

Voyage of the Mayflower in rough seas - WIP stages

Voyage of the Mayflower in rough seas - WIP stages

During September through to October 2019 this painting of the Mayflower, on its voyage to the new world in 1620, was created. It is an oil painting done on a canvas support sized at 24” x 36”.

The panel shows four stages of the painting. In the first section can be seen the canvas covered with a brown acrylic base, on top of which the drawing of the scene has been down with a darker acrylic line. White acrylic paint has been applied to show tonally lighter areas in the composition. Moving to the second panel a diluted oil paint layer has now been applied. These colours are applied thinly and give an indication of colour placement and tone relevant to each other, even though overall the picture looks (deliberately) dark. This acts as an underpainting so that when a new layer is applied, using thicker paint, the underpainting acts as a good support. The 3rd panel shows some 'proper' painting applied with details,with the last panel showing the finished painting. It should be pointed out that after the painting layer has been applied, and once dry, a 'glaze' layer is sometimes added in this case. This is like a semi transparent wash of colour (mixed with clear oil) applied over elements in the painting to emphasize colour qualities, for example adding hints of green to the blue water to give added depth.

The painting can be seen in greater detail on this link.

Voyage of the Mayflower in rough seas - oil painting

Voyage of the Mayflower in rough seas - oil painting 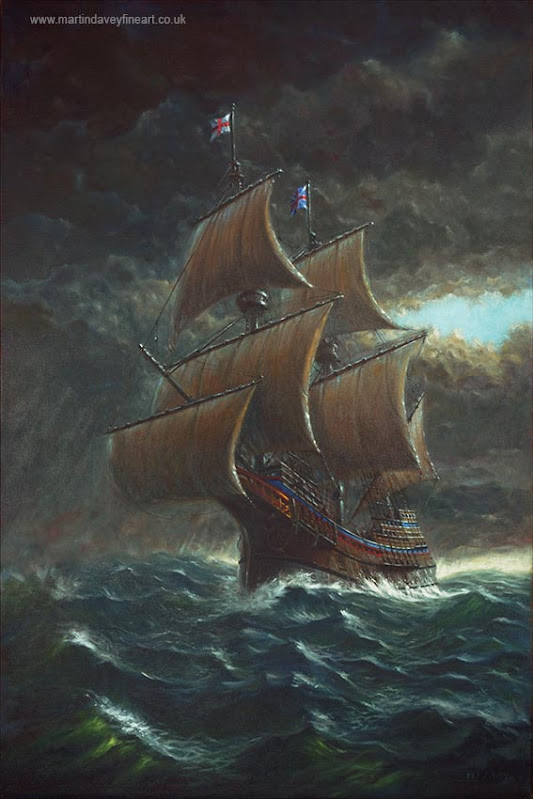 The voyage of the Mayflower in 1620 is depicted in this oil painting. It is seen in stormy weather in the North Atlantic on its way to the New World, after leaving Plymouth with Pilgrims from Holland and England. It is a small cargo ship, about 100ft long and it would have been a rough journey for the passengers as it was not built for people. It was also quite cramped as the original plan was for a second ship, Speedwell, to have also undertook the journey but it was found that it was to be unseaworthy at Plymouth, so the Mayflower had to take the extra load. The journey took approximately 2 months.

The painting is created in oils on a 24” x 36” canvas during September/ October 2019. As no one actually knows what the ship looked like various pieces of reference were cobbled together to create the most version of the design. Composition wise the image was at first designed on a computer art program where the initial drawing was envisaged and then painted digitally to find a good combination of colours. Once a suitable solution had been found it was then redrawn on a canvas and painted in the traditional manner. It was intended for the painting to be displayed as part of the celebrations held for the event at the Southampton City gallery but the COVID19 pandemic meant that the exhibition did not take place as planned and was substituted by an online one.

The artwork can be view in close up by going to this site. XXXX

A marine based oil painting created during spring 2020. The subject is Mayflower park, a public area in the city of Southampton where the public are able to view ships using the port. While the public buy refreshments from the ice cream van, a cruse ship is in dock preparing for its next voyage.

The panel above, split in to four sections shows different stages of the creation of this artwork. In the first one the scene has been drawn using brown acrylic paint on a light wash. On top of this lighter, tonal areas have been indicated in white, such as the sky. Following on the first layer of oil paint is applied quite lightly, and diluted with a thinner type solution. The colours applied are typically slightly darker, as this is the underpainting, but it gives a good indication of relative tonal and colour variations in the painting. One this level is dry then the final application of paint can be applied. This time the paint will be thicker and to true colour valuations. In addition the painting is a lot tighter on this pass with fine details painted in, as seen in the third panel. The last panel shows the completed painting. The work can be seen in better detail by following this link..

Ship and ice creams at Mayflower Park Southampton - oil painting
Mayflower Park, in the city of Southampton is the subject of this painting, completed during early spring 2020. The park is on the waterside and it is here that the public and easily view cruse ships and other ships using and docking at the port. The ship shown is a Freedom-class cruise ship operated by the Royal Caribbean cruise line. She is named 'Independence of the Seas'. The landscape painting is based on a photograph taken during summer 2012. A popular attraction at the park is the 'Mr Whippy' ice cream van, a very colourful sight compared to the drab colours of the cruise ship. This Hampshire based marine painting is painted in oils on a section of mounting board, sized at 20” x 16”. Details of the painting can be seen on this link.
Posted by martyee at 08:17 No comments: