spider with fly having a picnic on web 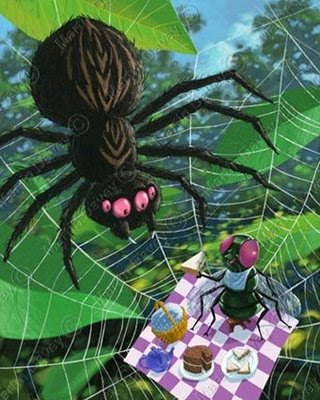 This was painted in 2007 and is loaded with 'dark humour'. The fly is quite happy eating his sandwich and is offering some to the spider. It is difficult to say if the spider will have some sandwiches for lunch, or have the fly for lunch. I experimented in this image of painting the background out of focus, like a photograph of a real spider on a web.

from the website...
This is perhaps a slightly frightening image to youngsters and is quite dark in its tone. The fly is having a little, sweet picnic on a spiders web. The large spider has appeared on the web and it is up to the imagination of the viewer what happens next. Does the fly get eaten or does the spider join in the picnic? I have gone for a very flat on, unrealistic perspective here, basically for styling and clarity in the image. I particularily enjoyed painting the food! The background was painted out of focus as if seen through a camera. The painting is created in photoshop to a size of 10" x 8".

Romantic Snails On A Date 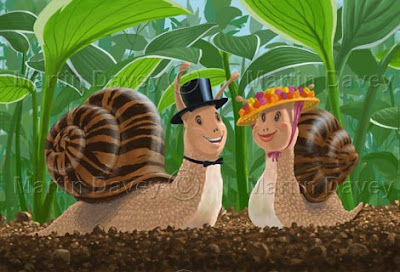 Snails in love is an early image of mine, painted about 2006. I was very much in to gardening at the time, and liked to grow 'hosta' plants, featured here in the background.

from the website...
Two romantic snails are seen on a date in the undergrowth in this digital illustration. They have early 20th century hats on, but no other clothing. The undergrowth is made up of 'Hosta' plants, favorites of snails and slugs. 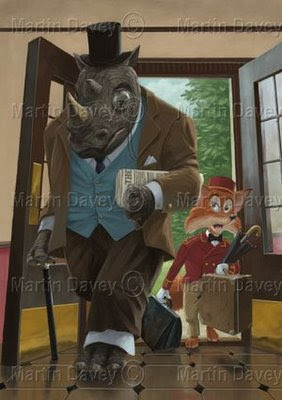 This painting was done A4 size at 300pp1 in december 2008. It continues the theme of animals in clothing. This time i wanted to contrast the size , and personality, between two animals. The Rhino here is powerful and bullish, being a business man of some sort, whereas the porter is eager to please and just gets on with the job. I wanted him to struggle with the big baggage as well. The edwardian clothing adds more interest in to the impossible scenario in this painting. The shiny floor was fun to do, as was the detail of the Rhino face and fox face.  from website...This painting shows what typically would be a mundane human activity, but replacing the people with animals. I was drawn to the idea of using a Rhinoceros and a Fox as they are so different visually in size and texture. The Rhino is large and bully, like an angry business man whereas the little fox is so small and friendly in comparison. It is difficult to believe that the fox could even lift the suit cases up. The edwardian setting adds to the idea of a more delicate era, in which the huge rhinoceros is strolling throught like a bull in a china shop. The delicate monocle on the creature adds to the bizzare spectacle. It was nice painting the two conflicting characters and also the brass fittings on the floor. The painting is done in photoshop to A4 size. 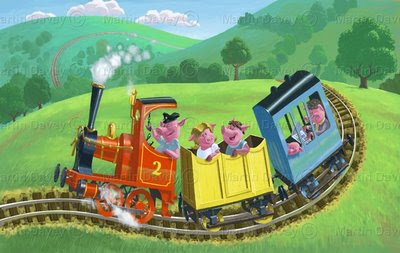 DAY TRIP FOR PIGS ON RAILWAY


This painting dates from 2005, and is one of the earliest photoshop illustrations of mine on the internet. I enjoy painting 'eccentric' railway locomotives, and I wanted to, at the time paint a picture which is clear and cute to the viewer. I have built in unrealistic curves in to the train track, hills and clouds.

from the website...
This is a very early digital painting, possibly the second one produced. The illustration shows some pigs on a day trip riding on a train in the countryside. The engine is a red steam engine, driven by a happy pig driver. The passengers are happy as well looking at the scenery, though one of them is busy reading a newspaper. I did intend to redraw this at a larger resolution, but the image changed in to another, similar illustration instead.

Bus queue in the rain 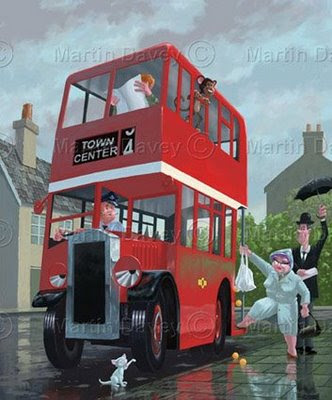 BUS QUEUE IN THE RAIN


This is an older painting of mine, done in Photoshop during 2006. It is quite cartoony, with the characters having black spots for the eyes rather than fully painted ones. There is quite a lot of dark humour in this image, particually with the cat right in front of the bus wheel, about to be run over. Also in the fact that the woman is in difficulties and her plastic shopping bag has split, with some of the contents spilling out. A surreal touch is the monkey on the top deck. I did wonder about giving the bus a 'disapproving' face, but the headlights seem to work as eyes anyway!
I was thinking of 'Reg Varney', from TV's 'On the Buses' when drawing the bus driver.

This was digitally painted in 2008 in photoshop at 10"x8" size. The scene depicts a rainy, depressing day in the UK with various accidents awaiting to happen, like the shopping bag about to break or the cat about to be run over. The bus driver is sitting smoking a cigarette, and could not care less. The monkey adds a bit of surrealism. The rain and the reflections were fun to explore and the red double decker bus is not a london bus but a made up one. It could be argued that the headlights on the bus are eyes! The crinkled destination blind and number in the wrong place are something that I am reminded of when I think of these old types of buses. 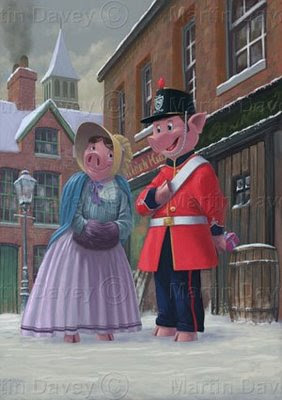 This is one of my favorite images completed in november 2008. it is painted A4 size at300 ppi, and took about 2 1/2 days. I had the idea while watching "little dorrit" , the BBC1 dickens adaptation. I thought it would be nice to paint some victorian clothes, and snow covered 'xmas' buildings. in fact this image did end up being my xmas card for that year. I was also influenced by the 'quality street' tin design, used here in the UK.I am overall pleased with the colour, composition and standard of painting.

from website...
This was painted in 2008 to A4 size in photoshop. It could be counted as a christmas scene or a winter scene, but this victorian pig romance illustration was inspired by christmas cards and victorian plays on the television. It was nice to do some research in to victorian costumes and the red army uniform helps to add a focal point. The snow was fun to do, and means less painting. The cartoon pigs add charm and are an unlikely romantic couple.

Welcome to my blog

I am an artist, having worked in animated television commercials for my years, in london UK. My last venture in to commercial animation was as a texture artist on the 3D feature film 'the Tale of Desperaux',released xmas 2008 in cinemas. But when I started in the industry there were no computers used in production, even though graphic designers had been using early macs for a few years. so for TV commercials, and features, all the artwork was hand drawn. This applies to the animation, with 12 drawings as an average used to illustrate movement of a character over a second of screen time. The characters were hand painted and traced on to clear acetate,and the background artwork painted in watercolour, gouache or even coloured paper. All the artwork was shot on a special 35mm movie camera, called a rostrum camera.
Computers eventually came along during the mid 1990's.
I started using photoshop, combined with a wacom drawing tablet, and as time went by learnt Flash, Lightwave 3D ,AfterEffects ,Painter and a few other programes as the industry changed ot being computer based.
I did used to paint with watercolours and acrylics but painting on the computer was well suited for the new commercial world. Over a period of time I will be post some of my artwork here, and my thoughts on each piece.
My website is here.........www.martindaveyillustration.co.uk/