On Sunday 15 April I exhibited work at the Bursledon Brickworks industrial heritage museum in Hampshire,UK, during their 'spring steam up', the second of which I have attended. Over 60 artists and crafts people attended and the event seemed well attended by the public. As well as showing four paintings (1,2,3), one of which is not on this blog curently, I did a small painting on site which draws attention. The painting was of 2 cows in a field, painted in Acrylics and is shown further down in the post.
In the two following photographs I can be seen at my stand, showing four oil paintings (one hidden from this angle, and display boards with colour printouts of other pieces of work. I prefer this location, rather than being beside a wall as more work can be displayed and I am not so easy to miss! It also give space for people to view me from behind while working. 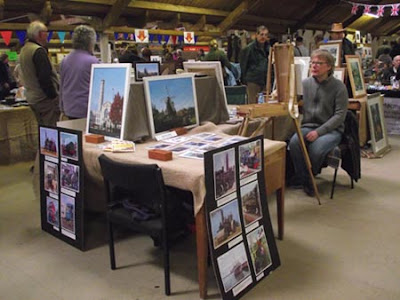 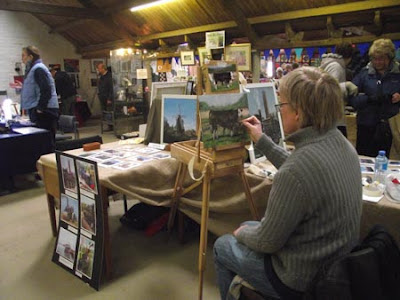 interior of Bursledon Brickworks showing the art and craft fair 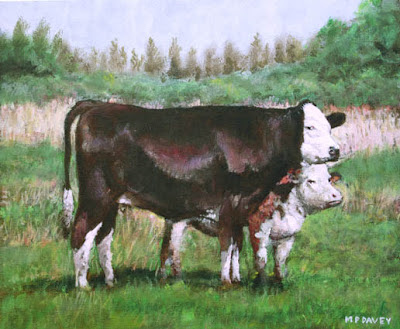 The painting that was produced during the day at Bursledon Brickworks was of 2 cows in a field, painted in Acrylics on a canvas board measuring 10" x 12". It drew a lot of interest from other artists and the public. The use of acrylics is rare for me as I usually use oil paint , but is a good medium to use at times like this because it dries quickly ( in seconds) so a painting can be built up speedily in front of the public, providing some entertainment, rather than literally watch paint dry. 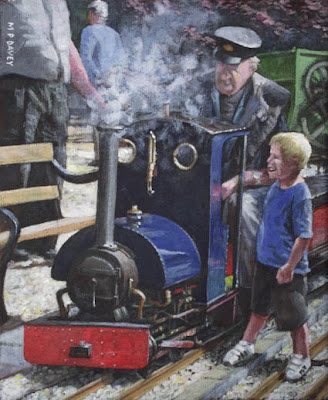 This is another demonstration painting produced in Acrylics during 2011 at an autumn crafts fair again at Bursledon Brickworks. The painting is 10" x 12" and is of one of the steam engine rides held at the museum.

from the website...
This painting of two cows standing in a field was done in acrylics on a canvas board measuring 12" x 10".
It is a smaller painting than the more usual sizes I work to, but this was done as a demonstration painting in public at Bursledon brickworks art show, so a quick drying, small scale project was needed. I did prepare the drawing and canvas the day before however. The artwork is based on a photograph that had three cows within it, but it looked too confusing.