A small snippet of a painting featuring the beach at Bournemouth, Dorset.... 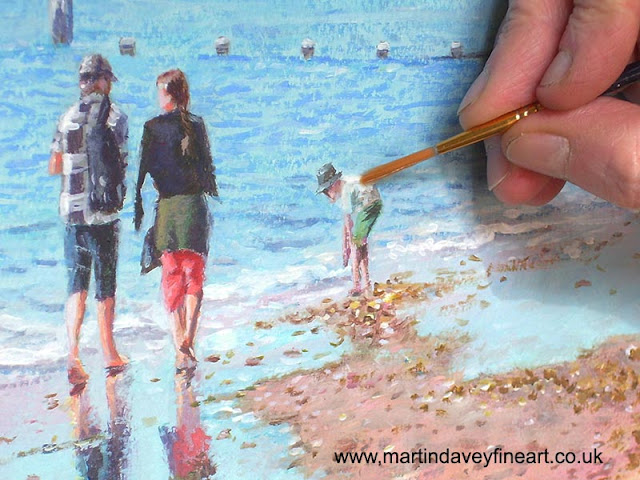 I am to start very shortly on painting 3 pig sculptures. These will eventually join a number of others, also painted by artists, on a trail in the town Gloucester and surrounding area. The trail is called 'Old Spots Sculpture Trail, and is based on an old Spots pig named Henson. The trail runs from June to August 2017 after which the pigs are auctioned off for charitable causes. Further information can be found here.
I have 3 designs intended for the trail. The following images show the designs, drawn in Photoshop, of them from different angles. The designs were create and submitted during late Autumn 2016.
The first one is known as Piggy Bank.


The second one is known as 'Floating Floyd'


The final one is known as 'Pigs May Fly'


The pigs are hollow and stand 1m tall approx, and will be painted by hand using acrylics. 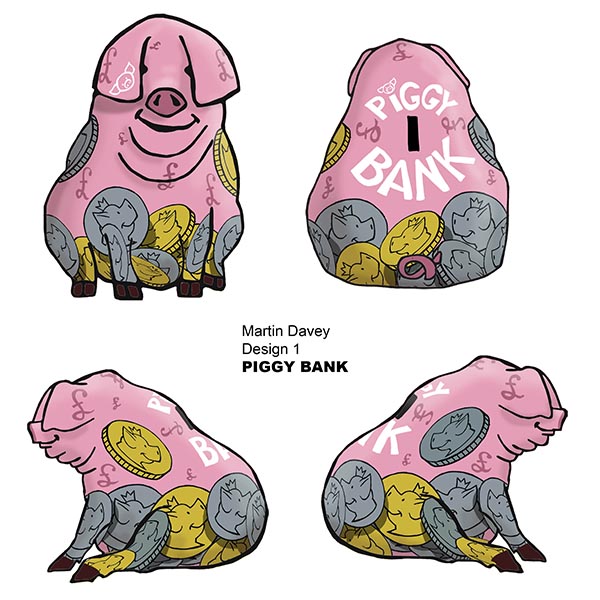 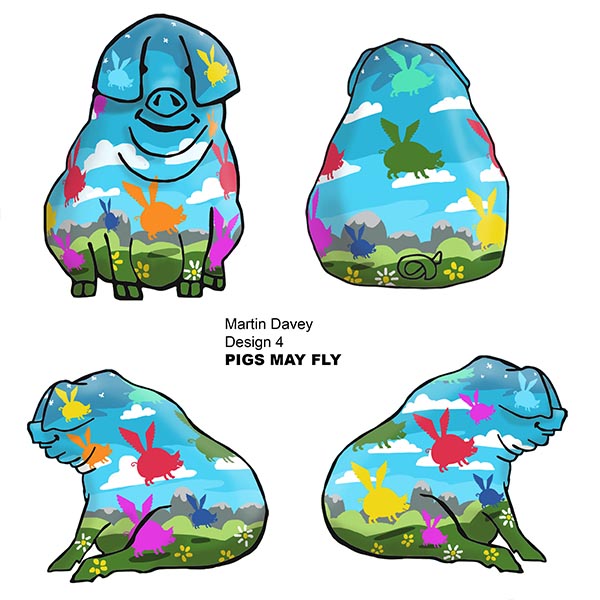 This panel show work in progress over stages of the acrylic painting featuring a scene at Mudeford Quay, Dorset in the UK. The first section shows the initial drawing, done in brown acrylic paint on top of a reddish ground wash, which will act as a base for subsequent colours applied on top. The second section shows base colours, or underpainting applied, which are usually darker tones of the final proposed finished colours. In the last section can be seen the final colours applied and fine details painted in. The whole painting was done in acrylics.
The final painting can be seen here.
#artist #mudeford #Christchurch #WIP #acrylicpainting

3 Paintings on display at the 'Steak of the Art', Southampton

3 Paintings on display at the 'Steak of the Art', Southampton

I currently have 3 paintings on display at the 'Steak of the Art' Restaurant, in Southampton,as part of the exhibition of the Southampton Art Society.
The restaurant chain specialise in exhibiting and selling original art, as well as providing a top quality dining experience, at each of their branches, the other two being at Cardiff and Bristol. The Southampton branch is at the Ocean Village waterside complex.
The exhibition finishes on the 7 May 2017.
The three landscape paintings of local, Hampshire scenes can be seen clearly on these links.
Two Yachts Receiving Maintenance In A Yard
Horse In New Forest
Lepe Beach Windy Winter Day

This composite picture shows a number of stages in the creation of this digital painting, featuring a Gothic woman vampire with bat friend in the typical scene of a ruined church at night.
The first panel shows the initial drawing, each object within drawn on separate levels, often roughly at first, and then cleaned up on another separate level. In this case this drawing was created on a Samsung tablet running the 'Auto Sketchbook pro' app. After a suitable drawing had been created it was then exported from the tablet (as a layered PSD) and opened in photoshop on a PC to enlarge it to the correct proportions for the final illustration and saved. After this stage the drawing is now ready for painting, and is opened up in the desktop version of 'Auto Sketchbook pro'. From now on the artwork is painted using a number of brushes using the drawing as a reference. Again each element is painted on layers. Once the painting was complete some final regrading was done using Photoshop.
The final painting can be seen here.
Posted by martyee at 09:54 No comments:

A small snippet of a painting featuring a quay at Christchurch, Dorset ....

The picture shows the initial drawing and finished painting of 'City Invasion Furry Monster' together. The drawing and painting are both done digitally using 'Auto Sketchbook Pro' software, found on tablets and desktop computers. The drawing would have been created with each element on a separate layer and cleaned up on a further layer until the drawing looks reasonably clear to work from.
For the painting the sketch is enlarged in Photoshop to the required output size and again each element is painted on separate layers to make working on the file easier and more flexible.
Often the content will be changed slightly, because it can be found that the drawing is not that good but it is just to act as a starting board, so the element when being painted would in effect be redrawn at the same time, rather than alter the drawing level. It can be seen that there are a few subtle changes between the drawing and painting on close examination.
The final artwork can be seen here in closeup.