The time had come to start work on the last pig, named as 'Pigs may Fly'. The design features various sizes of pigs, as silhouettes, and all done to the same basic design, flying upward through a blue sky and in to the night. The first stage was to draw out the design using a pencil, basically carving up the surface in to 'areas'. After that it is a simple task of then filling these areas with the predesignated flat colours as marked on the plan. However a single layer of paint is never enough so it is expected that two or more coats are to be needed. To help make the colours work I took time paint the sky around the silhouettes of the pigs so that they would take the colour better, rather that paint the pig colours over a sky colour. 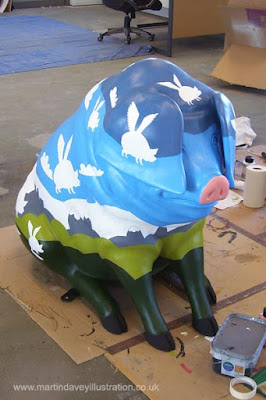 A few extra details and some fresh painting had also been done on the 'Floating Floyd' pig, namely the cords running between the large pigs and the power station on either side and a small rope coming of the little pig floating away.

The photograph above shows stage by stage work on an acrylic painting featuring Bournemouth beach and its famous pier during a late summers morning.The first panel illustrates a drawing, done in brown acrylic on watercolour paper, which has been stretched. The painted area is 20" 16". The second panel shows the base colours applied with limited details, some parts just having a darker than normal block of paint applied. The third panel shows the finished painting with the correct colours and details applied. The darker under-painting still shows through slightly the covering finished layers to give depth to the paintwork and colours.
The final painting can be seen here.
Posted by martyee at 21:56 No comments:

A small snippet of a painting featuring a boat at Hengistbury Head, Dorset....

This composite picture shows a number of stages in the creation of this digital painting, featuring a giant robotic Steampunk Robin, under-going maintenance in a factory.
The first panel shows the initial drawing using the 'Auto Sketchbook pro' app. Each object is  drawn on separate levels, often roughly at first, and then cleaned up on another separate level. After a suitable drawing had been created and the layout worked 'as a whole', it was then exported from the tablet (as a layered PSD) and opened in photoshop on a PC to enlarge it to the correct proportions for the final illustration, and then saved. After this stage the drawing is now ready for painting, and is opened up in the desktop version of 'Auto Sketchbook pro' on a W10 machine. From now on the artwork is painted using a number of brushes, using the drawing overlayed, as a reference. Again each element is painted on layers. Once the painting was complete some final regrading was done using Photoshop.
The finished painting can be seen here.
Posted by martyee at 19:21 No comments:

This digital illustration features a large, black, furry creature terrorizing the residences in a major city during the 1950s. It may have been the result of some scientific experiment that went wrong, so the glowing, red eyed creature is on the loose, and seen here crushing a taxi.
The painting was done during late January 2017 using 'Auto Sketchbook Pro' on a computer, with some final colour grading done in Photoshop, and can be seen in full detail here.

The project is to create three painted pig 'sculptures' as part of a street art/ trail project for the City of Gloucester, UK. The trail will be open to the public during the summer months of 2017 and then auctioned off for the benefit of several charities. Further details can be found here.
Work has continued to finishing off the 'Piggy Bank' pig and tidying up details. The pink coat of paint, a premixed 'Reeves' paint colour has worked well straight out of the pot. Originally I had thought about mixing it using other paints but in this case it worked well, as did the 'metal' paints used on the coins, again from Reeves. The black lining is a Daler Rowney system 3 heavy pigment paint. Now I was able to return my attention to the 'Floating Floyd' pig, based on the 'Animals' cover by the band Pink Floyd. This uses more colours than the other pig and some are premixed paint, and some mixed paint by myself. The pigs/ designs give the impression that is is just an application of one simple colour. However it is quite common to have to paint several layers (brush painting) to get a dense enough colour but unfortunately sometimes the colours are not flat, even after several coats, in particular when using ones own mixed paint. So I have found myself having to slightly change colours, using purchased mixed paint to an approximate shade, to get over this problem but I don't think that it would detract to much from the intended design.

A large steampunk themed giant robin in in the last stages of construction in a Victorian type of factory. Two of the designers are consulting the blue prints while the machine itself is being filled with hot, pressurised steam, off a wagon that has been pulled in by two carthorses. One designer has a special magnifying eye piece, the other some communication apparatus attached to his ear. In the distance can be seen other parts of the factory with tall chimneys.
The painting was done using 'Auto Sketchbook Pro' software during January 2017 for the initial drawing and painting. Final grading took place within Photoshop.
Posted by martyee at 08:59 No comments:

The project is to create three painted pig 'sculptures' as part of a street art/ trail project for the City of Gloucester, UK. The trail will be open to the public during the summer months of 2017 and then auctioned off for the benefit of several charities. Further details can be found here. 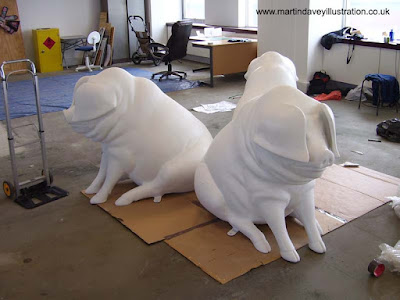 The first image shows the pigs after delivery and placed in the work space. I will initially work on one design (Piggy Bank) with some work on the second (Floating Floyd), just to have something to work on while awaiting paint to dry on the first. The third will be left as is for a short while. The designs can be seen in an earlier post here.
The first process is to pencil out the design, using my 2D designs created in Photoshop, as a good guide to placement of the elements on to the 3 dimensional form of the pigs. Once all the elements of the design fit satisfactorily on the sculpture, I then tidy up the drawings, following which I mask parts of the design using masking tape, the reason being it helps to make painting sections easier, in this case the coins and lettering are masked out so as to make applying the pigs, pink base colour, easier to do.
From then on it is a case of straight forward painting each section across the sculpture, using acrylic paint, though it should be noted that all the painted areas typically needs 2-3 coats of paint for a full bodied colour, meaning that each sculpture is painted a number of times. For the painting of the coins originally I was going to use ordinary yellow/ gray colours but then came across the 'metallic' acrylic paint in a shop and thought that would make a nice addition to the paintwork. 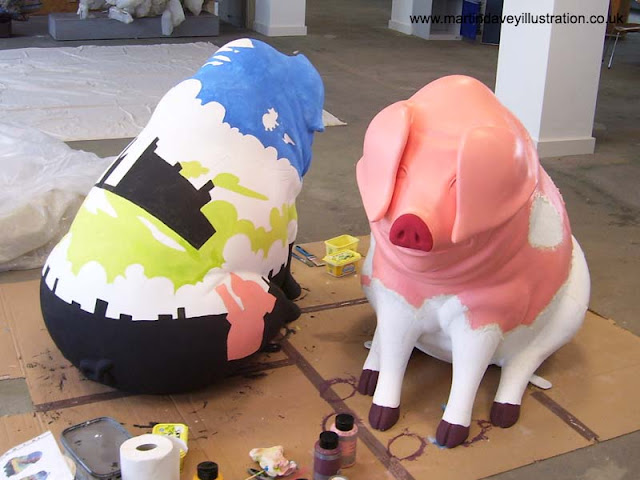 This digital painting features a cute,gothic Victorian lady vampire, floating around in the grounds of a ruined church on night. With is one of her friendly bats on th is fine, moonlit night which shows up the stone sarcophagus that she has risen from.
The image was created in 'Auto Sketchbook Pro' on a windows computer during February 2017, and can be seen in close up here.
Posted by martyee at 22:58 No comments:


This painting shows Mudeford Quay, on the outskirts of Christchurch, Dorset. The scene is of the entrance to Christchurch harbour with the quay on one side and on the viewers side is Hengistbury Head with some children at play at the end of the sandy spit.


The dominant building is the Haven House Inn and as can be seen a number of buildings have a black painted side. However over the past few decades much development has taken place here as it is a very popular location for tourists. It is also a popular location of fishing and fishing boats can be seen unloading their catch during the day at the quay side. The small section of water is known as 'The Run', and is the only entrance to the harbour. It has been the scene of battles between smugglers and customs officers back in the 18th century. Despite its small appearance the water has an extremely fast flow to the sea and is a taxing route for boats and yachts, and swimming near this outlet is considered dangerous but a ferry links the two sides of the entrance and takes a few minutes. It is a 14 minute car drive plus a long walk to go around the harbour via dry land.


Christchurch Harbour is a Site of Special Scientific Interest. The 352 hectare site is designated both for its biological and geological interest.


The painting was done using acrylic paint on stretched paper and has a 20” x 16” image area, and was completed during November 2016. The finished painting can be seen here.
#Christchurch #painting #mudeford #art #landscape