A small snippet of a marine based oil painting...
Posted by martyee at 08:53 No comments:

This is the view looking south from a spot on Watts Park, Southampton in Hampshire. The clock tower of the Civic centre, built in the 1930s, can be seen above the trees. On the right in a very abstract form is the statue of Isaac Watts.This 12" x 9" plein air painting was done on the afternoon of hte 10th September 2020. 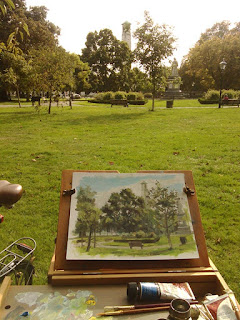 A steam railway engine is shown running through the southern English countryside in a 1950s setting. The artwork is sized at 22" x 16" and painted in oils on mounting board. It was done for reproduction as a greeting card, sized at 7” x 5”, for a railway society.

The panel above shows three stages of the paintings evolution. In the first panel the drawing, done in dark brown acrylic paint can be seen, which is painted on a brown wash. White paint has been added to indicate tonally lighter areas, such as the sky. Moving on to the second panel a basic set of colours has been added using diluted oil paint. This is done to indicate where the colours and tonal variations are within the artwork, and act as an underpainting. The third and final panel features the finished oil painting. Here the paint has been applied over the underpainting in a thicker and more refined manner, and detail added. This nostalgic railway scene can be seen in better resolution by following this link.