A gigantic railway locomotive is about to depart a city with very tall skyscrapers in this 1940s inspired retro railway illustration. The digital artwork was completed during December 2019. The first stage of the illustration was to do the initial drawing/ colour concept on a Samsung tablet running software called 'Auto Sketchbook Pro', a drawing app that uses a pressure sensitive pen. Once the concept is worked up to a point using the device, the file is then transferred to a more powerful windows desktop machine, which also runs the same program. The tablet can only do so much before it reaches its operational limits and the image, to be printable, needs to be of a far bigger size than the tablet can cope with. The file is exported as PSD levels as set on the tablet app, and these remain on the desktop file. The image is enlarged to 6000px (horizontal) and then is redrawn/ repainted at this new definition, with some work carried out additionally in Photoshop.
The picture below shows three panels, the first is the drawing with the second showing the colour rough as completed on the tablet. The final panel features the finished artwork as completed on the desktop machine. The illustration can be viewed in greater detail on this link.

A tree in Autumn features in this seasonal landscape study. The tree is one to be found within Southampton Common, Hampshire, near to the entrance.


Shown in the picture above are four stages of the painting. In the first, the basic scene has been drawn out in brown acrylics on a yellow ochre flat colour, also done in acrylics. A basic indication of shading has been added. The second panel has some colour added in the way of a wash of diluted oil colour, used to indicate areas of colour and tone. These are not the final painted colours for now, and are left to dry. Moving on to the 3rd panel it can be seen that paint has been applied heavier on to the painting, over the previous, dried layers. These colours are now truer to the intended tone and the painting has become more detailed in these areas. The final panel shows the completed work, with all the final layer of paint applied. A additional stage was to give most of the painting a 'glaze', which is where a further level is applied in the form of translucent colours mixed with a clear painting medium. It is similar to stained glass, though not as strong, but this helps to enhance the colours when seen by the human eye as light travels through the extra layer, hits the underlying area and bounces back. A camera does not see this effect however when a photograph is taken. 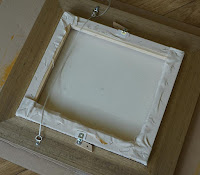 On other point of interest is that the support (canvas) is home made. This is to say that un-primed canvas material was purchased from a fabric shop and then fixed to a wooden stretcher bar, home made from scraps of wood. Once the canvas was stretched tight over the wooden stretcher bar, it was primed ready for painting. It was found that the painting surface was quite smooth.


The painting can be seen in greater detail by following this link.
Posted by martyee at 15:23 No comments:

The subject of this scifi/ fantasy scene is a extremely large steam locomotive about to depart a city comprising of some very tall skyscrapers. Some employees of the railroad are having a meeting before departure. The landscape has a retro/ 1940s vibe in terms of the design of the buildings, car and locomotive sitting on the monorail railroad track. The main engineer is dressed in a classic uniform for the job.
Auto Sketchbook pro was used for the creation of this digital illustration. Initially it was started using a Samsung tablet to rough out the idea up to a certain stage. It would be nice to continue using the tablet but it has technical limitations as digital work is processor and ram intensive. It is exported to a windows desktop computer, still running the same program but with the power that is now available. One of the first jobs is to resize the whole image to something that can be printed up to a large scale, the initial image being too small for anything other than screen viewing. Then the whole painting is redrawn/ painted to the final required details/ colour for final output.
The illustration was completed during early December 2019, and can be seen in detail by following this link.
Posted by martyee at 11:10 No comments: 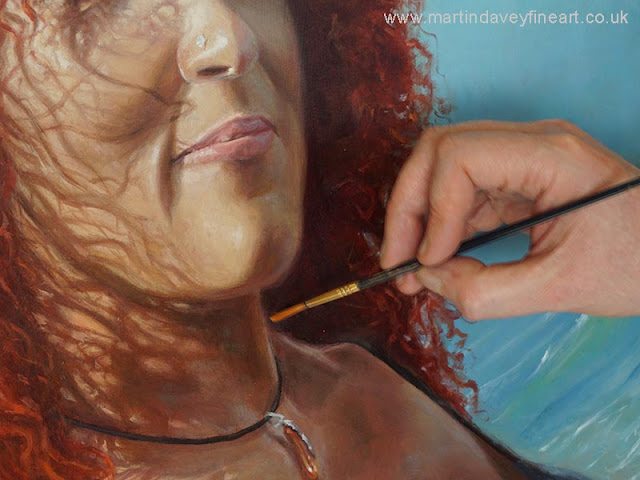 A small snippet of a female figure oil painting...
Posted by martyee at 16:18 No comments: