Steampunk escape from attack of Big Ben foe - digital illustration
An Edwardian couple have been performing as a small army defeating a foe that was about to cause destruction in London. They are leaving the scene on a flying machine, recently built by the ex serviceman while the passenger is pleased with her good shots at disarming the enemy, which is now lost it's footing on the clock tower of Westminster Palace (also known as Big Ben) and about to self destruct.

Created in June 2020 this digital illustration was produced in 'Sketchbook Pro' with final work done in photoshop. It can be seen in greater detail here. 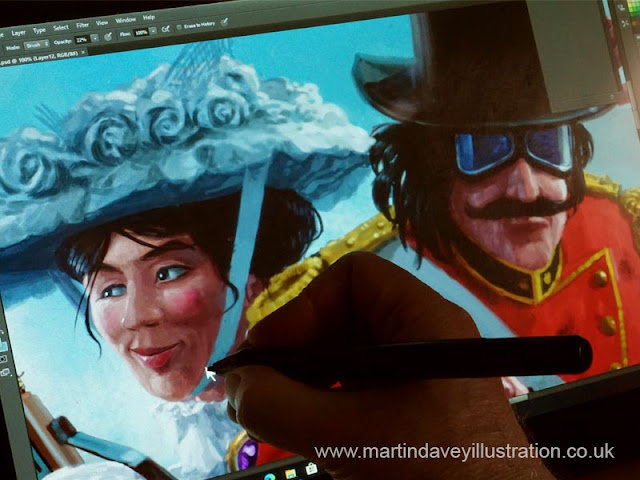 A small snippet of a stream punk Edwardian couple in an action scene...
Posted by martyee at 15:28 No comments:

This dark fantasy vampire illustration was created during early spring 2020. It is digitally painted using 'SketchBook Pro' running on a Samsung tablet. This enables me to sketch out ideas quickly at a fairly low definition and work up a concept sketch. The first image shows the drawing as done on the tablet followed by the same drawing worked up in colour, again on the tablet. Once I am happy with the way it is progressing the file, which is stored as a 'layered' PSD file is then exported in to a W10 desktop computer running the same programme ( with extra functionality on the PC). The file size pixel dimensions are enlarged to 6000 x 4500px to provide a sharp illustration for output, if printed and in any case a detail picture will be the result, unlike if the image was kept at the original tablet image specifications. The final image shows the finished illustration, where the rough image has been repainted with finer details. Also it can be noted that more things have been added in to the composition, as in more creatures for example.
This image can be seen in greater detail on this external site.
Posted by martyee at 17:12 No comments:

After an apocalyptic event of some sort a different world is now offered. In a ruined church a tall, attractive female gothic vampire, dressed in black attire is having a stroll with her pet creature. It is on the end of a chain but happily resting while its mistress surveys the scene of devastation while enjoying the shade on her umbrella. The pair are not alone as in this strange world, with its dominant red, cloudy sky and barren landscape. There are a number of flying creatures in the air and other, land based ones are scurrying around the building ruins.
This illustration is painted digitally. It is initially painted on a tablet using 'Sketchbook Pro'. When it has been developed to a point the file is then exported to a larger computer where the image is enlarged are repainted to a much finer standard. It measures 6000 x 4500px and was done in early spring 2020.
The gothic horror illustration can be seen in better detail on this link.
Posted by martyee at 08:40 No comments: