This acrylic painting shows the famous 1950s pier at Bournemouth, Dorset, found on the South coast of the UK. The painting shows a sunny morning in late summer, with the golden sandy beach that the seaside resort its known for, and some tourist enjoying the pleasant weather.


The pier, seen here from the Boscombe side, in its current form was built in the 1950s, replacing an earlier Victorian structure. Until recently the pier did feature a theatre (in the large building), but is now used for sporting activities. In addition other equipment for sporting activities have been added to the pier recently.


The 20” x 16” painting is done in acrylics on stretched watercolour paper, and was completed during march 2017. It can be seen in greater detail here.
Posted by martyee at 21:57 No comments:

This fantasy digital painting was done during the latter part of January 2017. The subject is a girl armed with sword with a large black dragon behind her. In the background can be seen an abandoned castle.
It was painted using 'Auto Sketchbook Pro' running under windows, with final grading and some extra textures added using Photoshop.
The painting can be seen in detail here.
Posted by martyee at 22:01 No comments:

A small snippet of a painting featuring a forest in Hampshire...

This picture shows four stages in the creation of a painting called 'Beach boat under covers'. It is painted in acrylics on paper, and is sized at 16" x12". The first panel shows the drawing, drawn in acrylic brown paint on the watercolour paper which has been stretched. The second panel shows work on placing the base (underpainting) colours down, slightly darker than the intended finished colour.In the third panel we see the colours and detail becoming more refined, with the forth panel showing the finished painting.
The location is at Hengistbury Head beach, near to Christchurch, Dorset, with the water being Christchurch bay and the small suburb of Mudeford on the land beyond.
The finished painting can be seen in greater detail here.
Posted by martyee at 18:45 No comments:

During April I decided that some of my sites needed updating in that they were not compliant for displaying on mobiles devices such as phones and tablets, although they displayed fine on a conventional computer. This site was the first to be dealt with, being only a small one, and was built in 'Weebly'. It looks overall like the one it replaces and uses many of the same elements, but now is easier to view on whatever it is seen on. Some newer paintings were also added at the same time. The other sites will take longer to do as they have far more work to display.
The site is to be found here. 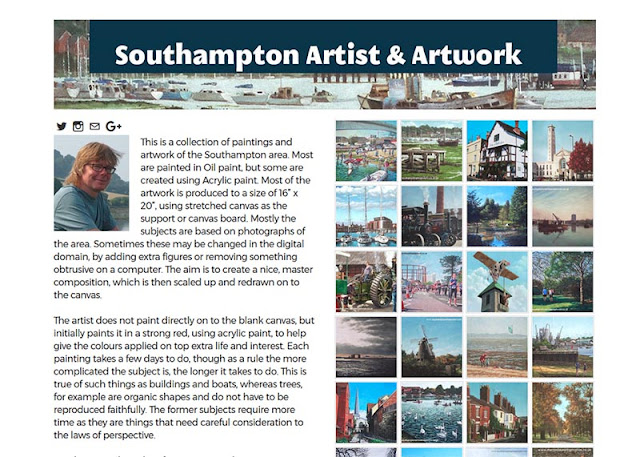 All of the painted artwork has now been finished and the next step, as the picture show was to give each pig a coat of varnish. The varnish helps to bring all the colours and painted elements together.
The pictures show the pigs prior to wrapping and dispatch to Gloucester, in west England. Here they will be placed in to a trail in the City called 'Old Spots Sculpture Trail, and is based on an old Spots pig named Henson. The trail runs from June to August 2017 after which the pigs are auctioned off for charitable causes. Further information can be found here.

This picture shows 3 stages in the production of the digital painting called 'Spring Girl', a humorous take on a young woman picking flowers in the countryside. The image was done using 'Auto Sketchbook Pro' running under W10, and I used a UGEE tablet (with built in screen) to draw on. The first panel shows the drawn layer using the 'pencil' tool. Once this level is OK, I then paint base colours underneath on separate layers under the drawing layer using the 'acrylic brush'. I then continue to work the painting up until such time that the drawing level can be turned off, as becomes a hindrance to seeing the painting itself and working on the fine details.
The finished picture can be seen here.
Posted by martyee at 13:23 No comments: