This is a work in progress showing the stages of a painting depicting a horse nibbling at some grass at the base of a burnt tree. The location is the New Forest, Hampshire in the UK.
The painting is done in oils on a canvas board measuring 12" x 10". The first panel shows the basic drawing done on a red acrylic ground which is my preferred base for painting on. The drawing is done in brown acrylic paint. The second panel shows a base layer with colours applied using acrylic paint which acts as the under painting. The third panel shows the finished oil painting on top, completed during April 2016.

Today the final items were painted on to the zebra, named Rio by the sponsors 'Casa Brazil', a Brazilian restaurant in the city . One of these was the logo which fitted in well as it has a 'flame' look, and suited its placement in to the Olympic torch flames very well. The final stage of its preparation for display on the 'Zany Zebra trail', in which it will be seen on the streets of Southampton during the Summer, is a coat of varnish. 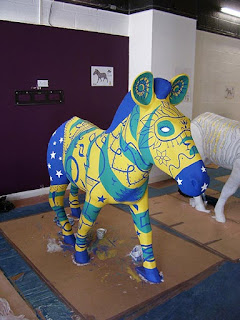 After more than a working week away, I continued work on my Zebra, now named Rio, for the Zany Zebras campaign as run by Marwell Zoo, Hampshire. This project will see up to 47 painted sculptures of Zebras on the streets of Southampton during the summer of 2016. The Brazilian themed artwork now shows details placed on top of the initial green and yellow base colours (stripes). I will not be doing any more masking now. From here on it is all painted with quite a fine brush but still using emulsion paint. 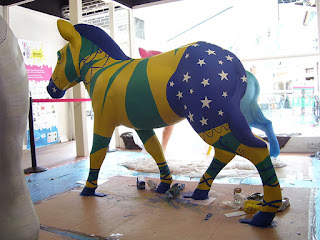 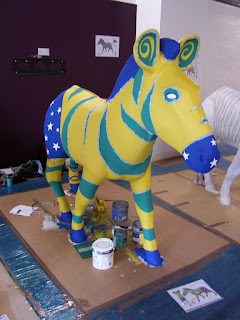 Today was spent filling the white areas with yellow, up to three coats and then repairing the damage caused by the masking tape on the green sections. Fortunately the repairs do not take too long and can't really be seen. The aim is to get the large areas of blue, green and yellow done so that they look tidy and have dense colour. It was good to see the whole 'Zany Zebra' now covered with paint. The next stage after this is to apply some detail in the form of pattern, squiggles and the Olympic torch for example. I did some detail on the rear end and leg to get a feel of how it is going to be practical to do. The details turned out quite well and were done freehand. As the details are quite organic they did not have to be 'mechanically perfect' which would have been difficult. A cheap 1/2 inch sable hair brush was used and I found it worked well by loading it with paint and having the confidence to work quickly. Being slow would have made the end result more shaky than it is!

This entry shows the Brazilian Zebra a few days on from the previous post. All of the blue and green base sections have been painted, using 3 layers of emulsion paint. The yellow areas are still mostly bear white though some progress has been made. The yellow areas near to the feet have a number of coats applied. The stars that had been masked off and covered in blue paint have now had the masking removed to reveal white stars.
Some work was needed, as with all the masking, to repair damage to the paint when removing the masking tape, but there appears no way around that and it still gives a better finish. The areas have to be masked off a few times on either side of the edge, depending on what part is to be painted so there is a lot of work involved in masking but the painting is quite quick to compensate.
As can be seen there are a few stars on the muzzle and 'spirals have been painted in to the ear area and some eyelashes put around the eyes. 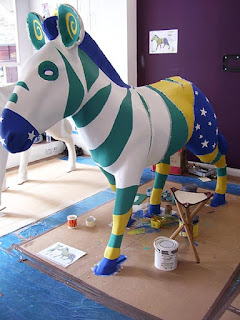 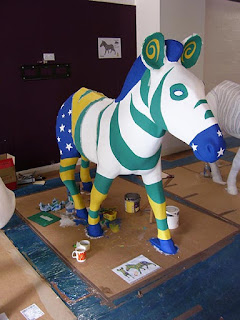 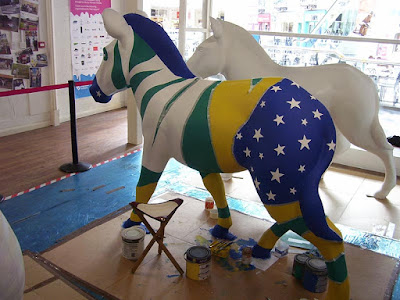 From the beginning of April I started work on my second Zebra painted sculpture. The campaign is run by Marwell Zoo and will see up to 47 of these Zebras on the streets of Southampton forming a street trail for the summer season. This 'Brazilian' Zebra of my design is sponsored by 'Casa Brazil' and as can be seen on the photographs some of the base layers of colours have been applied. The areas have masking tape around then to help keep the edges sharp and easy to paint, as these areas, using household emulsion paint, often need to be painted up to 3 times to get a solid colour on the white base of the Zebra. The back, large blue area also has a number of stars that will need to remain white so these have been masked off to keep them white while applying the blue paint with a large brush. 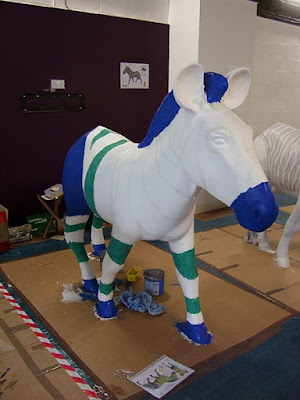 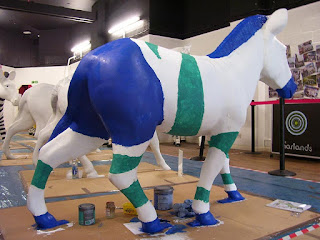 This is the design for one of the Zebras (Brazilian Zebra) I will be creating for the 'Zany Zebras' campaign, which will feature a large number of full size Zebras sculptures occupying the City of Southampton, in the UK. It has been masterminded by Marwell Zoo, located outside of the city with the aim of creating awareness and the need for protection of Zebra. Each Zebra sculpture will be painted by local artists and sponsored by local or national companies. They are in place on the streets for the summer term after which a glamorous auction is held for their sale, the proceeds of which go toward the protection of the animal.
I will be creating two Zebras for the campaign. The first one was sponsored by ABP (Associated British Ports) one of the largest employers in the town in people and physical area and completed in March. This second Zebra is sponsored by 'Casa Brazil', a chain of Brazilian themed restaurants to be found in Bournemouth, Portsmouth and Southampton. This Zebra will be created during April.
It will be turned in to reality from early April at the Marlands Shopping Center, using an empty shop unit as a base where this one and others can be seen to be created. This design was created/ drawn in Photoshop. The design celebrates Brazil and its important role in the 2016 Olympics, and used the colours of their nation flag.

Cutting about the 'Seafaring zebra' sponsored by ABP, as featured in the Daily Echo Thursday 31st march 2016.
Posted by martyee at 17:59 No comments:

This painting was done during February 2016 and shows a scene on the outskirts of West Southampton. The river is the Test and in this view depicting the Totton area, we see that the painting is dominated by a bridge carrying the main Southampton to Bournemouth railway line, the track on the right hand side heading for the resort. Further in to the distance the A35 Totton Bypass road bridge goes over the tracks. On the left hand side can be seen the start of Totton town. In the foreground, walking around the mud flats with the tide out at this time, can be seen a man possibly looking for a place to fish. The painting is sized at 16” x 12” and painted on thick stretched paper using acrylic paint.
http://martin-davey.pixels.com/featured/river-test-at-totton-southampton-martin-davey.html
#hampshire #artist #rivertest #southampton #painting