Steampunk escape from attack of Big Ben foe - WIP stages
This digital illustration was completed during June 2020. Shown above are four stages demonstrating the completion of the artwork, beginning with the initial drawing, created on a Samsung tablet. The software was 'Sketchbook pro' and relies on a pressure sensitive pen, as supplied on the tablet.

Once the drawing has reached a satisfactory start, some rough colour ideas are then painted in using the same software as seen in the second, upper right panel. After this stage the time has come to do the artwork ' correctly' as it needs to be far larger than the tablet can cope with and more finely detailed. So the file, as PSD layers, is exported in to a windows desktop machine also running Sketchbook pro, the file enlarged considerably and the image painted over to a higher degree, as shown in the 3rd panel.

In the 4th panel can be seen the final image, where there are subtle changes to the composition and some of the elements, like the woman's face and other details. The whole image can be seen in detail on this link. 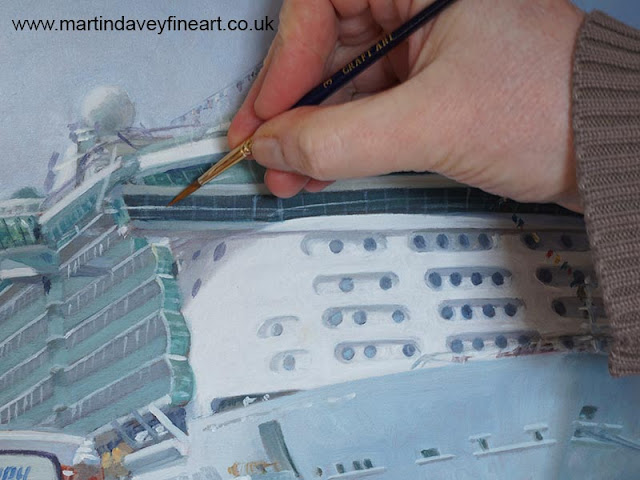 A small snippet of a cruise ship at port based painting...
Posted by martyee at 18:00 No comments: