This railway themed oil painting shows a small tank locomotive (called because of the water tanks mounted each side of the boiler) at a station. The engine is being topped up in the station bay in the English town of Havant, on the south coast. The locomotive crew consisting of the driver and fireman are to be seen preforming checks before departing for another service, and refilling the water tanks. Based on an old blurry and contrasty photograph taken in 1957, some research was made in to the engine (a 'Terrier numbered 32661) and the surroundings, including the cars. In addition the figures were reposed and then redrawn, but based on the ones in the picture. The locomotive itself is a LBSCR/ SR class A 0-6-0T, commonly known as a 'Terrier'. These small but very popular locomotives were built during the 1870s, and have a very elegant design. Many were still in service in to the 1960s, and a number can be found still running on preserved railways.


Painted using oils in November 2019, on mounting board sized at 33” x 23” approx. The artwork can be seen in greater detail on this link.
Posted by martyee at 15:57 No comments: 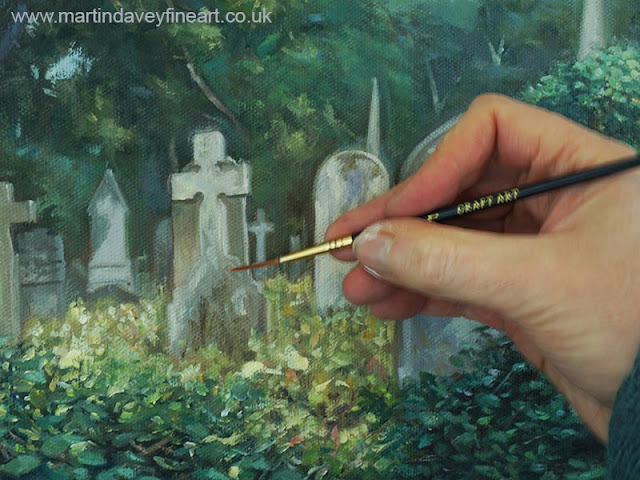 A small snippet of a local graveyard themed painting...
Posted by martyee at 10:53 No comments:

Painted during Autumn 2019 this oil painting, sized at 33” x 23”, features a woman with a deep interest in spirituality and other mysterious aspects of life. She was painted against a made up sea background to reflect her Aquarius astrological star sign, the original photo being taken in a car park! The first panel shows a drawing, done in brown acrylic paint on a lighter brown wash. Suggestions of tones and highlights have been added, again in acrylic. In the middle panel a rough underpainting has been applied in oils, which provides a base to the final intended colours. These under-painted layers are thinly applied, using an artists paint thinner or similar medium. In the final panel we see the completed painting with thicker paint applied. All of the colours and details are correctly done to the intended values of colour and tone. On top of this completed painted layer when dry is a 'glaze' layer, which is a further coat of paint applied thinly within a thickish transparent medium. This is used to highlight certain elements in the painting and empathise the colour. The under layer of paint partly shows through the glaze layer adding depth to the colour as seen by the human eye, and not really a camera lens however. The face and hair were tackled in such a way while the sky and sand were left as is. This portrait oil painting can be seen in greater detail here.
Posted by martyee at 18:13 No comments:

A woman called Julie Diaz kindly posed for this oil painting. It is based on a photograph taken at a car park on a sunny day. A made up 'seaside' background was introduced, based on her astrological sign (Aquarius), which was a better background than the car park too! It is sized at 33” x 23” and is on primed acid free mounting board. A glaze was used on the figure, but not the background, to add depth and richness to the colours. Julie is mixed race and enjoys wearing red, black and gold. She has many interests mainly based in the areas of spiritualism. Painted in September 2019, the finished artwork can be seen in detail on this link.
Posted by martyee at 09:54 No comments: 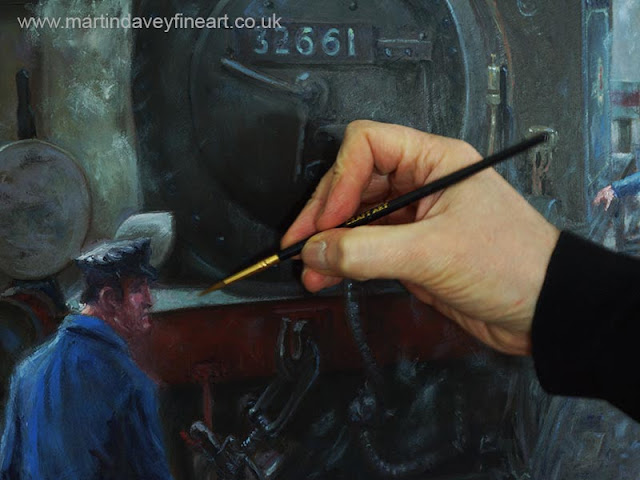 A small snippet of a railway based oil painting...
Posted by martyee at 11:51 No comments: