This digital illustration was created during October 2018. It feature a happy steampunk witch going about her business of creating potions and spells at her cauldron. It can be seen that the coven has a number of technical refinements including a gas fired cauldron, a steam pump for pushing various chemicals around the area and in to the cauldron, and some evidence of electricity for various experiments. The witch still prefers to create her potions the manual way when possible. As found in many covens a black cat is a customary addition to the surroundings, and is perched up on a stool watching activities. The witch herself still wears the typical pointy hat but has a number of 'steampunk' additions in the way of goggles, corset with straps and stylized jewellery.


The illustration is painted in 'auto sketchbook pro, initially drawn on an android 'galaxy' tablet to find the composition, with some basic colour work being done on the device too. At a later stage the file is exported to the same software running on a Windows 10 machine, where the image is greatly enlarged and repainted to a finer standard for final output, which can be seen on this link.
Posted by martyee at 11:42 No comments: 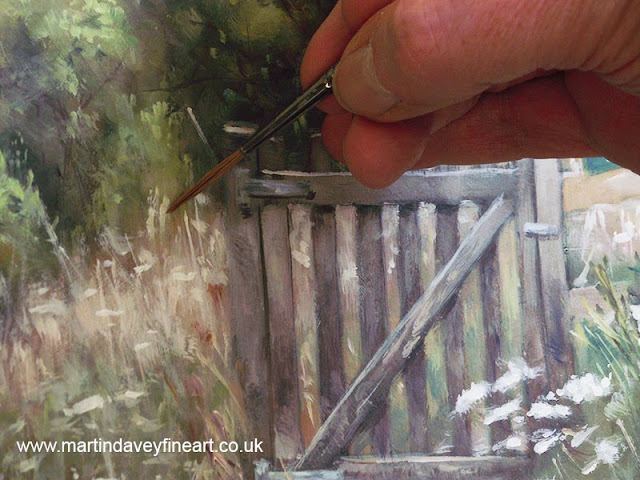 A small snippet of a countryside scene oil painting...
Posted by martyee at 16:34 No comments:

Line of trees in Hampshire during Autumn - oil painting

Line of trees in Hampshire during Autumn - oil painting

During September 2018 this oil painting was created, main as an exercise in [painting trees in a simpler (impressionistic) way, rather than falling in to the trap of painting each individual leaf and branch. Oil paint on a board, which was sized at 20” x 16” was used. The subject was based on a photograph taken a number of years previously, just with the intention of finding a way to painting trees in a quicker and 'slicker' way.
The finished painting can be seen here.
Posted by martyee at 13:05 No comments: 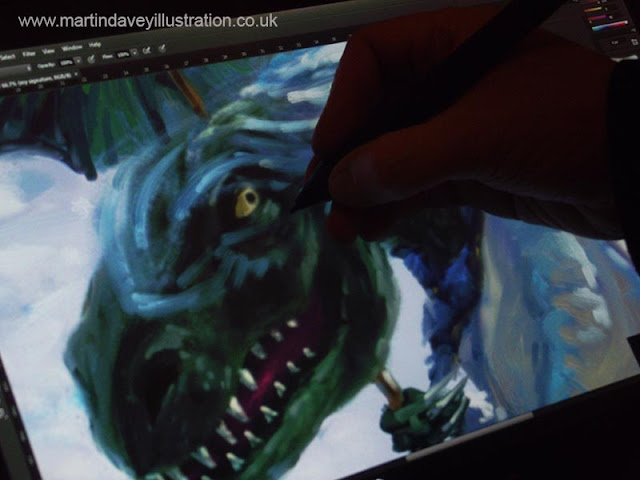 A small snippet of a funny dinosaur image...
Posted by martyee at 18:45 No comments:

Completed during October 2018, this illustration features a witch happily working in her coven. She is dressed in 'Steampunk' attire and also has technology installed which is in keeping with the theme. A black cat is perched on the stool looking on.
The artwork was created digitally using 'Auto Sketchbook pro' software. It is begun on an android tablet where the drawing and layout are decided, followed by 'roughing' in the basic colour information for the artwork. The first two panels show this and it can be seen that a little ghost was going to feature popping out of the cauldron. The final panel shows the finished work, where the ghost has been dropped. This stage is performed on a powerful Windows computer, running the same software. The image is greatly enlarged from the original file and the subject is refined when repainted at this size.
The finished artwork can be seen here in greater detail.
Posted by martyee at 21:26 No comments:

A guest at an Edwardian summer garden party is elegantly sipping a cup of tea. However not is all at is seems as she happens to have the body of a wasp, complete with a stinger.
Painted digitally in 'Sketchbook Pro' during August 2018. It was started on a Android Galaxy tablet and when work had progressed to a certain level, the file, including levels, was exported on to a windows 10 machine running the same software. This means that the brushes and the behavior of them remains consistent. The file is greatly enlarged and repainted at this stage to produce the final, refined painting.
On this link the final artwork can be viewed in detail.
Posted by martyee at 21:27 No comments: 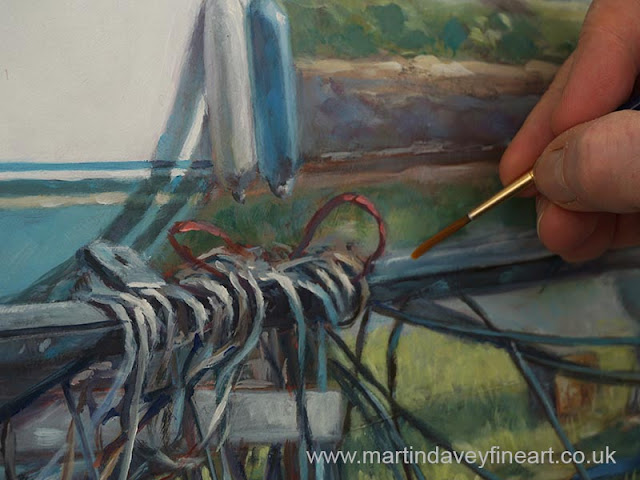 A small snippet of a marine based oil painting...
Posted by martyee at 18:18 No comments: