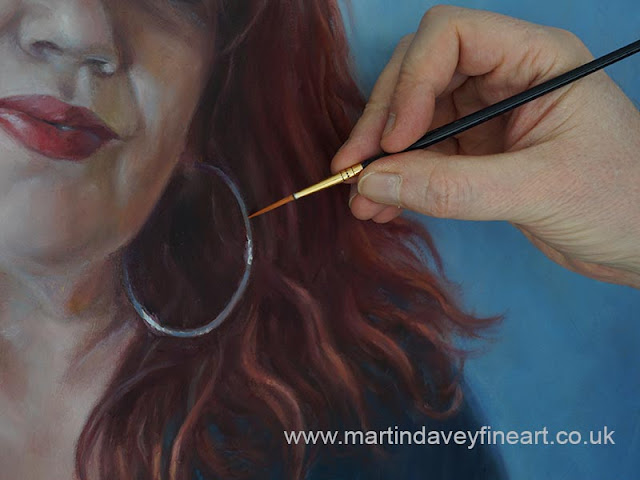 A small snippet of a figurative based oil painting...
Posted by martyee at 21:38 No comments:

This portrait was produced during May 2019 and features a ceramicist busy at work in her studio working on a stylised bust in clay.
Above can be seen four stages of the process to paint the portrait. The fist panel shows the drawing, scaled up from a posed photograph, which is done with brown acrylic paint on a yellow ochre wash (ground). Moving on, the second panel shows basic areas of colour thinly applied in oils to act as a base under-painting. This will be painted over with thicker paint with truer colours, as shown in the third panel. Detail is also added as the painting is created with more 'finished' strokes. The final panel shows the oil painting (sized at 33x 23.5”) now finished.
It can be seen in detail on this link.
Posted by martyee at 20:33 No comments: 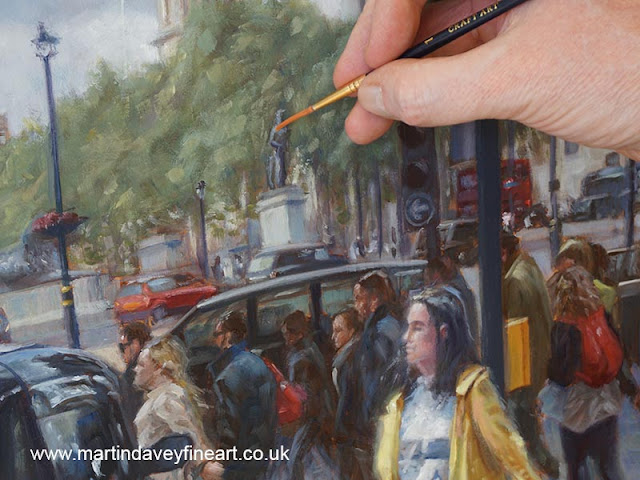 A small snippet of a London based scene with taxis oil painting...
Posted by martyee at 07:29 No comments:

This large oil painting, which measures 60” x 40” was produced during May 2019. The subject is Brick Lane, on a sunny day in the east end of London, an unglamorous street but very popular in recent times. The lane itself is shown running left to right across the painting, with Hanbury street cutting through the centre. Originally a site for making bricks and tiles in the 15th century, it is very close to Spitalfields, known for the Jack the Ripper killings and later criminal nativities of the Kray Brothers. The area was largely avoided and forgotten, but during the latter part of the 20th century it became a large Bengali community, and is famous for the amount of curry houses in fierce competition with each other. The area is also host to an art community, with most notably artists Gilbert & George, and Tracey Emin living in the area, and the ex Truman brewery now given over to art exhibitions. Nowadays the area is quite a tourist destination and has large crowds in the area during the weekends. This painting was exhibited in the area, in a small gallery along the lane.
The painting can be seen in greater detail by following this link.
Posted by martyee at 07:46 No comments: