There is a retro sci fi feeling to this illustration painted during January 2018, featuring a scene dominated by an astronaut in space, looking at an approaching scout vehicle. This craft has come from the much larger space station seen in the distance, and which is orbiting a hazy, green alien planet. There is evident visual influence from such productions as 2001 and space 1999 in this digital painting, made in 'Auto Sketchbook Pro' initially, with Photoshop used to finish off the illustration.


The illustration can be seen at a larger scale on this link.
Posted by martyee at 17:35 No comments:

A small snippet of a marine based, acrylic painting.... 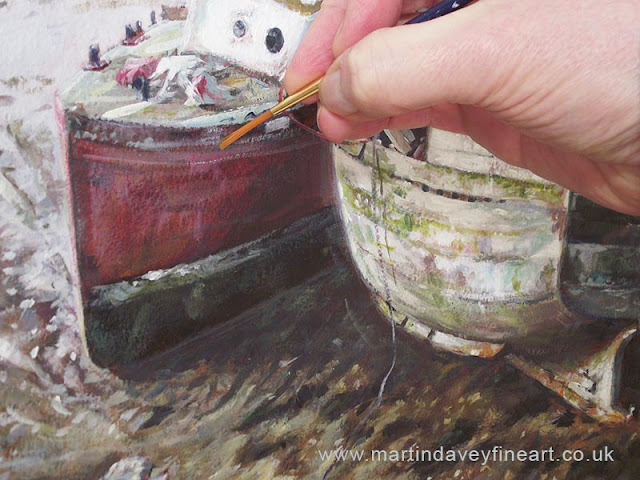 During March 2018 this manga styled, gothic digital illustration was created featuring a vampire about to make advances on a young woman. The scene is lit by the candelabra the busty woman is holding.
The image is based on very typical horror based situations and conventions.
It was dawn and painted on a Galaxy android tablet as a sketch, then later exported to a windows computer running the same software but with more power. The final details and colour grading was then done in Photoshop.
The illustration can be seen in greater detail on this link.
Posted by martyee at 22:12 No comments:

This nightmarish scene with a giant creature of some sort on a trolley was created in January 2018. The setting is an underground industrial setting, set in a possible Victorian/ early 20th century time frame. Additionally a 'steam punk' visual flavour was added.. The men cleaning up help to add a sense of scale. It was painted in 'Auto Sketchbook Pro', with final work being carried out in Photoshop.
The illustration can be seen clearly in this link.

This illustration was created during March 2018, and was initially painted digitally in 'Auto Sketchbook Pro', using an android tablet. The horror based, manga inspired picture was worked up to a point (as in the centre image), where- upon it was exported in layers (as a PSD file) on to a windows computer also running Auto Sketchbook pro, and also enlarged to create a better quality image. At a certain stage the image is then worked on in Photoshop for extra details and colour grading, with the finished image seen on the right. Using this link the illustration can be studied in better detail.
Posted by martyee at 21:34 No comments:

This painting was created during late November/ December 2017. The subject is a rainy day along a street in central Southampton, UK. It was created in response to an 'open' exhibition at the Southampton main gallery, the subject being 'the seasons'. This painting came 1st place the competition out of over 500+ entries.

Above is an image showing a composite of the painting being worked up in stages. In the first panel can be seen the initial drawing, done in brown acrylic paint on a reddish ground (base). In the second panel work can be seen on the application of oil paint, though these are just the base layers or under-painting. In the third panel it can be seen that quite a few layers are now being applied with details added as the work progress. The fourth panel shows the finished painting.
Follow this link to view the final painting at a larger scale.