A late summers scene at Southampton Common is the subject of this oil painting, sized at 20” x 16” and painted on canvas. The view is looking west with the busy Hill Lane running across the picture hidden behind the trees in the distance, the painting showing the west entrance/ exit for the common. The 'Bellemoor' pub is just beyond the entrance as is the residential area of Shirley. Some trees have started to shed their leaves and the early evening shadows are quite long at this time of year. This painting was partly done in public during a publicity event at the Marlands Shopping centre, Southampton during late January/ early February 2020, where the public were encouraged to ask questions about the artwork as it was worked upon.The painting can be seen in greater detail on this link.

The world famous landmark of St Paul's cathedral, London, is the subject of this oil painting, created in late December 2019 and finished off a few days in to the New Year. The building is shown in early autumn light from a south easterly aspect. The main road populated by mainly buses, including one of the famous new Routemaster buses ( Boris Bus) is Cannon Street. The building itself has hosted various important public events and is a big landmark in the city. It was the tallest building until 1967. Its designer was Sir Christopher Wren, who also built a number of London's famous churches surrounding the area. Work was started not long after the fist St Paul's was destroyed in the great fire of London in 1666, and was opened for use in 1711.


The artwork is painted in oils on acid free mounting board, as is sized at 33” x 23”. It can be seen in greater detail on this link.
Posted by martyee at 14:49 No comments: 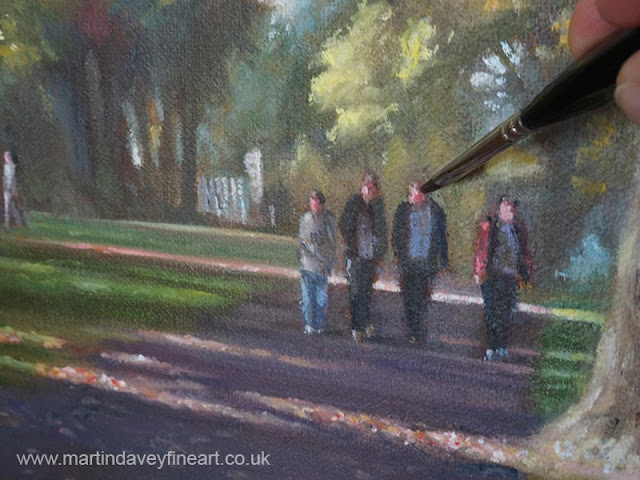 A small snippet of a park based painting...
Posted by martyee at 07:33 No comments:

Southampton's 'old' cemetery is approximately 27 acres in size and was opened during the 1840s in the town of Southampton, on the southern coast of the UK. Now in the 21st century it sees very little use due to a lack of space. Some parts have been reclaimed by nature which adds an additional level of beauty and interest with views of headstones covered in ivy and bramble. This painting show a view over the cemetery looking west, with Hill Lane running parallel behind the viewer. It is painted on canvas sized at 30” x 20”, and completed during December 2019 over a couple on months due to other projects. This graveyard oil painting can be seen in better detail by following this link.
Posted by martyee at 20:38 No comments:

An elementary student from Omaha recreated a scene based on one of my Dinosaur illustrations, which in turn is based on a famous Manet painting. The student is named Avry Hermandson and is a pupil at the Nelson Mandela Elementary School. The class project was to recreate a scene from a famous painting and Avry whose fanatical about dinosaurs, found my illustration online. As well as dinosaur friends, a fruit picnic and drawings of trees can be found in his mock up!
Original illustration link.