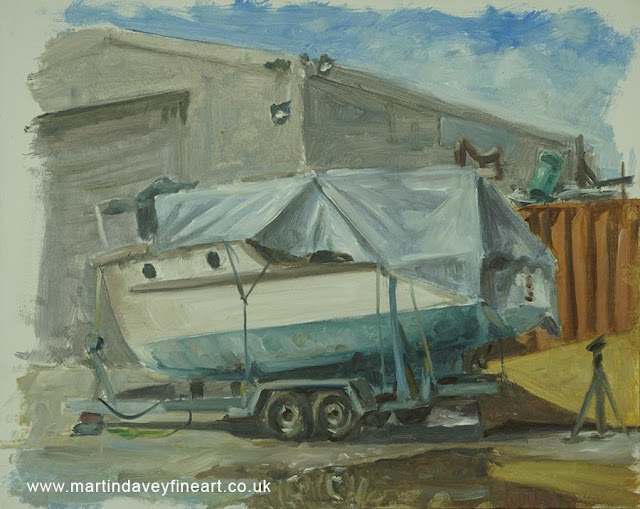 Painted in early September 2020 this boat undergoing restoration was pictured on a trailer after some rain. It the same boat yard that the tractor in the previous 'plien air' post No3, is to be found. Oil on board 12" x 9".

This scene features two Highland bulls enjoying the sunshine in the countryside. The location is just outside the town of Brockenhurst where a footpath meets Rhinefield Road. This is within the area of the very large New Forest, which can be found in the County of Hampshire on the south coast of the UK. The painting was done during July 2020 and is done in oils on mounting board, sized at 35.5cm x 20cm.

The artwork can be examined in better clarity on this external site.

A Massey Ferguson tractor is shown in this plein air painting created late August 2020. It was parked in a boat yard along the river Itchen, in Southampton. It has no licence plate and spends its life going up and down the yard. The artwork is done in oils on a piece of mounting board sized at 12" x 9". 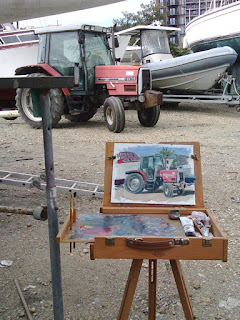 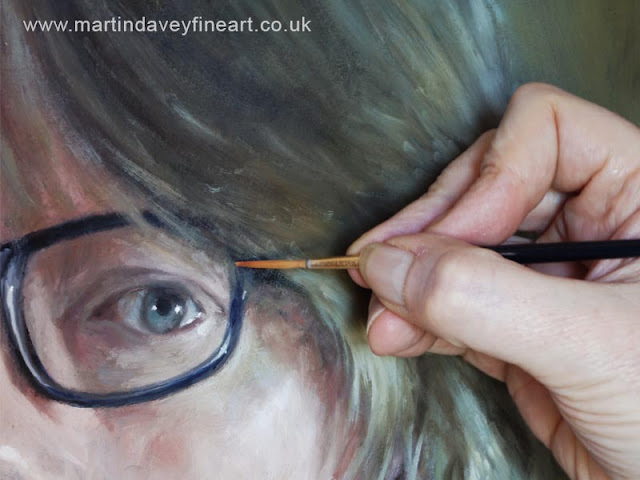 A small snippet of a figurative painting...
Posted by martyee at 16:35 No comments:

12" x 9" oil sketch of a pair of headstones with path, done on a Sunday afternoon in August. The cemetery itself is a large Victorian one, now largely unused and mostly overgrown. 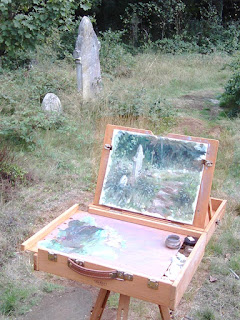 I often use digital tools during the creation of my artwork. The amount can vary. For a full digital illustration it follows that the entire art will be created using computer technology, right from the blank canvas, through to the drawing and then the finished work. For original oil paintings created using traditional materials the subject may actually be worked out on a computer too. For instance the original photo reference of a scene may be imported in to photoshop and resized to a canvas (size/ proportions) to find the desired composition. Then elements may be altered within the scene like removing/ adding people, telegraph poles or different skies.

Sometimes a traditional painting may feature a subject that does not exist and so it has to be drawn up from scratch. Such was the case for this painting of the 'Mayflower' ship during rough seas in the North Atlantic, set during 1620. I did quite a lot of research in to what the ship looked like as apparently no-one actually knows. This means that the full size replicas built are based on typical ship building concepts of the time, so they are pretty accurate in general terms. Paintings of the scene produced during the past four centuries again show similar designs but the fine details vary between artists.

To produce my version of events I drew the ship on a computer (sketchbook pro) and then painted it digitally within the same programme as seen in the picture panel. This gave me the opportunity to find what colours to aim for and what type of atmosphere to try to get within the image. It took a few days to find a visual solution which would give something to aim for when I came to create the finished item, though it would be expected that the oil painting would not be a direct copy of the digital 'rough'. This is mainly to do with the way 'real' oil paint works when compared to the electronic equivalent, in the subtle ways colours are blended and certain brush strokes are emphasised, and just my own hand movements across the canvas. It should be noted that the physical painting is far, far larger than the equivitent digital image if printed out, so it should be noted that the picture above does not demonstrate that. Certainly working a painting out digitally beforehand works wells and creates a more direct approach.

The finished oil painting can be seen in detail on this link.

Painted in August on a Sunday morning, this small oil painting (12" x 9") shows a boat on stilts undergoing maintenance. The location is a small yard called Shamrock Quay in Southampton. It took about 80mins and is done on primed mounting board. 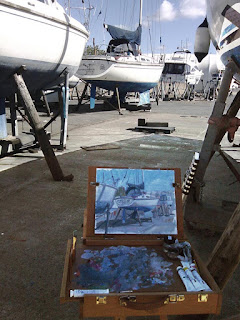